I am prepared to bust a commonly held myth today….  Not all women like to shop.  There!  I said it!  In fact, some of us dread it….  Especially when they have to shop for and with their very particular, sensory challenged sons.

So – let’s set the scene.  I tell Henry last week that I will have time to shop with him on Monday for his new bedding for his dorm room, and maybe a couple of new shirts (he doesn’t seem to grasp yet that he won’t have someone doing his laundry twice a week come September…)  I let him know we’ll be going when I return from yoga in the morning – not at 1:30 or 2 p.m. when he rolls out of bed (quite the summer schedule – but let’s not go into that right now…)  So – I go to yoga to try and get into the right frame of mind and stretch out my muscles – try, if you will, to get my shoulders down from around my ears!  I’m trying to breathe into one of my last poses, which after 3 1/2 freaking years of practising, I still can’t do without assistance!!!!  (“Ohm – serenity now,” she thinks as she’s grunting into this pose….) 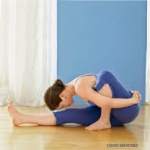 Marichyasana A (pron. marry-ches-se-na) – and that’s not me!

So I get home, get ready and get Henry in the car.  I feel relaxed!  I’m ready for this!  I’m pumped!  We’re going to have some quality mother/son time….  I look over at him — he’s got a huge frown on his face.  Great!  This is going to be the usual torture….  Can’t I just have an outing where we cheerfully pick something out, pay for it, and go home?  Even better with him saying, “Wow Mom!  Thanks!  Really appreciate you taking the time and effort to get me something that I’ll like!”  Nirvana!!  Something to shoot for?

Anyways – that’s not what happened.  At this time of year, finding flannel sheets is damn near impossible….  But that’s what feels nice against his skin….  Christ!  I find a clearance table with amazingly, flannel duvet covers!  Unfortunately, most of them are Christmas themed – I also don’t want him to look like a dork in his dorm….  We find something appropriate – but no go on the sheets.  I want pillow protectors, but all they have are waterproof – does that mean they will make that crinkly sound every time you move your head?  That’s not going to fly!  Jesus!  Can’t anything be easy?!  We try to pay and the little zippy-thing that takes your card isn’t working…  The sales lady has to re-enter everything again on the other side….

We schlep everything to the car and come back to look at shirts.  We start to peruse….  He’s says he’s NOT buying anything that HE DOESN’T LIKE!!!!  (He thinks he’s being discreet….  he’s not….)  We pass the underwear department – “How are you fixed for underwear Henry?”  “I’M FINE!!!!”  You see where this is going….

On the way home, I’m silent.  I’m so pissed off I’m afraid if I say anything, I’ll start shrieking uncontrollably….  I park…  We start talking….  It’s always the same….  When he’s feeling anxious or stressed, he lashes out at me (while I’m trying to do something for him incidentally…)  Knowing this doesn’t help when it’s happening.  It sucks.  My shoulders are somewhere around the crown of my head – I don’t have the energy for more yoga….

News flash….  As I was writing this last paragraph, Henry came into my office, hugged me and told me he was sorry….